Could COVID-19 have wiped out the Neandertals? 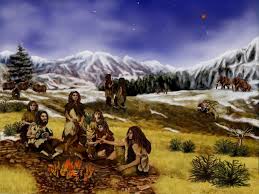 Could COVID-19 have wiped out the Neandertals?

Everybody loves Neandertals, those big-brained brutes we supposedly outcompeted and ultimately replaced using our sharp tongues and quick, delicate minds. But did we really, though? Is it mathematically possible that we could yet be them, and they us?

By the same token, could not the impossibly singular Mitochondrial Eve, her contemporary Y-chromosome Adam, and even the “Out of Africa” hypothesis simply be convenient fictions paleogeneticists tell each other at conferences to give their largely arbitrary haplotype designations and subsequently derived evolutionary trees more credence?

Perhaps one of the best ways to try to answer this question is to ask what the coronavirus has to say about the issue. Svante Pääbo, director of the genetics department at the Max Planck Institute certainly believes that Homo sapiens Neanderthalensis, or just Homo Neanderthalensis, if you prefer, is extinct. Pääbo, the son of 1982 Noble laureate Sune Bergström, has made a nice living off of Neandertal bones, finding gene after gene that is distinctly “Neandertal.” In 1997, Pääbo successfully sequenced mitochondrial DNA from a specimen found in Feldhofer grotto in the Neander valley. Fast-forwarding past a few recent PR disasters, the Germans were able to capture the productive Swede and set him upon the task of dealing with these inconvenient heirloom skeletons that kept showing up.

This September, Pääbo and colleague Hugo Zeberg announced that the major genetic risk factor for severe COVID-19 is inherited from Neanderthals. (We note that Nature publications prefer to include the h.) By any measure, this is a bold statement. The team found that severe COVID-19 disease is associated with specific genetic variants in six genes within a 50K-base-pair-long region of chromosome 3 that derived directly from a Neanderthal heritage. Similar investigations have also identified a protective Neanderthal haplotype on chromosome (chr) 12 that reduces the risk of severe COVID-19, and a protective region on chromosome 9 that is associated with the ABO blood groups.

Not content to rest on their laurels, Pääbo and Zeberg have just kicked things up a notch. The pair recently reported on the bioRxiv preprint server that another exclusively Neandertal variant, this time in the promoter region of the DPP4 gene at chr2q24.2, is really pulling the strings on COVID susceptibility. DPP4 is a widely expressed extracellular dipeptidyl peptidase involved in immune function and glucose metabolism. As it happens, DPP4 is also the receptor gene for the MERS coronavirus. Now we are getting somewhere.

Although other researchers have insisted DPP4 is not a SARS-CoV-2 receptor, it can be tough to ignore coincidental findings like this when therapeutic options are sorely needed. Inhibitors of DPP4 that are already used clinically to treat diabetes appear to have effects on COVID-19 patients. Amidst the flurry of ongoing SARS genetic research, we reported on Monday that a handful of immune-associated gene variants including IFNAR2 and TYK2 also control COVID outcomes. Curiously, this study also identified DDP9, a sister gene of DD4 residing at chr19p13.3, as a key mediator of inflammatory lung injury. DPP9 has a similar serine protease activity to DPP4, but differs in that it is not membrane-bound.

The DPP4 gene is not too far away from a long-defunct remnant centromere found nearby in the chr2q21.3–q22.1 region. There is also an additional vestigial telomere sitting down in the q13 band. What are these structures doing here? If pressed for a one-line answer to the question of what is it that makes us human, an excellent answer is the fusion of two small ape chromosomes to make the human chr2. Do Neandertals have a fused chr2?

Of course they do. In fact, they seem to have the same version of the speech gene, FOXP2, which Pääbo put on the map in 2002. Human FOXP2, which differs from the chimp version in two key places, was famously mutated in the “KE’ family from Britain who all had a specific disability in their use of consonants. In the more recent COVID risk factor studies, Pääbo searched for single nucleotide polymorphisms using data from the 1000 Genomes Project, then checked with the COVID-19 Host Genetics Initiative to see if Neanderthal haplotypes for DDP4 associated with disease severity.

The problem with this line of work is that we don’t have that much sequence data to tell us what makes a Neandertal a Neandertal. There are just a few good genomes available from skeletal remains ~120,000 years old and ~50,000 years old. These come from Europe and southern Siberia. These kinds of statistical shortfalls make normal folks suspicious when their 23AndMe scorecard calls them out as 0.98, or 1.67 Neanderthal.

One point that the COVID epidemic is now successfully driving home is that blind medicine no longer cuts it. Blind medicine refers to anything done in the absence of personal patient sequence data. Above, we took a few cheap shots at paleogenetics and their historical haplotype attributions. This was for good reason, and we have a few more shots to take. When genomics data is given with respect to a reference sequence, problems can frequently arise. This is because, simply put, there is no such thing as a reference sequence—it, too, is completely arbitrary. Updates and improvements are made to various reference sequences from time to time, but no true reference sequence will ever be had.

In contrast to the MERS DPP4 receptor, no ACE2 receptor variants have emerged as a risk locus for severe COVID-19. However, many of the other genes associated with SARS-CoV-2 infection process and life cycle have come to light. For example, four variants (rs464397, rs469390, rs2070788 and rs383510) robustly affect expression of the TMPRSS2 serine protease in lung tissue. TMPRSS2-upregulating variants are present at higher frequencies in European and American populations than in the Asian populations.

Perhaps of more immediate concern, now that vaccines are rolling out, is the question of whom the vaccine might help, and in some cases, whom might it harm. The latter prospect is usually framed in terms of the now well-known phenomenon of antibody-dependent enhancement (ADE). While for other diseases like Dengue or respiratory syncytial virus, ADE is taken very seriously, these three bad words are usually dismissed quite handily in discussions of COVID. However, recent research now suggests that ADE in COVID is very much a thing. read more