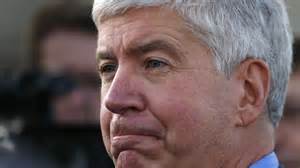 After twenty years of teaching Social Studies in Detroit’s Public Schools and teaching the children that democracy is messy at times but by far the best form of government, I have finally come across an example that illustrates the point beyond any doubt. It is Michigan’s failed experiment with government by dictatorship i.e. by emergency managers.
Exhibit Number One: Detroit Public Schools. After years of raucous school board meetings at which every move the board tried to make was scrutinized and criticized by members of the public some of whom were at every board meeting and made it their job to analyze every proposal, then Governor Engler decided to put an end to the mess by taking the first step toward dictatorship by appointing a board and superintendent. This evolved into the present emergency manager system that doesn’t even pretend to be democratic.
The State took a system that had rising test scores and a one hundred million dollar surplus and turned into a system with falling scores and a deficit running into the hundreds of millions. Nobody knows how many hundreds of millions because they are too embarrassed to say. Ironically, they want the students and teachers of Detroit to pay for the years of mismanagement that they were denied the right to participate in. Somehow it is Detroit’s mess to clean up.

There’s a lot more dirt under this rug but we can’t air it all here. Enough said to make point number one.
Exhibit Two: Flint water. I thought destroying the Detroit Public Schools was the worst that the State of Michigan could do to children of Michigan i.e. denying them any chance of getting a quality education but I was wrong. In Flint the children are being denied the right to normal intellectual development by being subjected to lead poisoning. A circumstance so tragic that it brings tears to your eyes. We cry for the children who must suffer from someone else’s mistake for a lifetime. We cry for their parents who will also suffer from the effects of lead poisoning and even worse watch their children suffer.
The people of Flint never got a chance to say what they thought of using Flint River water. There was no one in charge who had to listen to their concerns or answer questions to their satisfaction. No democracy means no accountability. The emergency manager did not need their consent. He only needed the ok from the man who gave him his authority: Governor Snyder.
No better argument can be made for democracy on the local level than these cases. When decisions are made by people whose kids don’t go to those schools or who don’t have to drink that water or answer to the people who do, tragedy is the result. The real question here is will the State live up to its responsibility to make the people whole for the damage they have inflicted on them. First, the State should provide health insurance for everyone in Flint who thinks they have been effected by the water debacle. Second, they should be providing clean water to the residents NOW. Third, after the mess is cleaned up how will you compensate those damaged by your irresponsible actions? If I run over a child, the state requires me to get out of my car, render assistance and take responsibility for the damage I have caused. If I flee, I am subject to criminal prosecution. So it is that the State must take responsibility for the lives of the children that it has destroyed.
In Detroit the State should put Detroit Public Schools in the same position that they were in prior to the States meddling in their affairs. Give Detroit its elected School Board back with the one hundred million dollar surplus they had when you took over. They should also get back the 1.5 billion dollar bond issue that they passed thinking their elected board would be spending it to improve their schools, but instead was spent to no effect with the Governors friends. As for the deficit, it should go by the old adage if you break it, you own it.