Happiness; what is it? who has it? 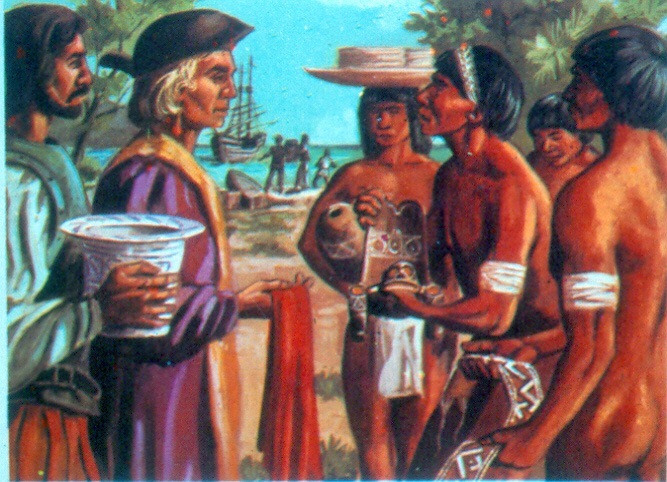 Happiness
by Vikki J.
Aisiki, Staff Writer UIN
It is an incredible consideration that I may not know what makes me happy.
A statement by one of the United States framers, Thomas Jefferson, is the
right to “pursue happiness”. While the naked eye may interpret this phrase
as a statement of rights, whereas it is in a reality, a declaration of
disconnectedness from one’s inner or higher self. Jefferson suggest
happiness resides in an externalism that ultimately sustains an illusion of
scarcity and creates a social environment rich in human domination and
unfulfilled greed.
Race and racial domination has been the unresolved foundation of the
United States since inception. Indigenous groups, such as, the Westo,
Chimariko, Pensacola Indians, were lost to genocide when they treated the
invaders with human kindness that eluded their understanding of life.
Again, lacking internal depth or spirit, they sought happiness in taking from
those that befriended them and who were, in many ways, fundamental to
their survival. This external understanding of “happiness” is essentially the
reason why in European thought it is described as a “pursuit” because the
inner self is not a point of consideration. Thus, domination, explotation, and
manipulation are tools, as well as, the end game that is never won. It only
ends when one group or people have been eliminated. So, the circle of the
“pursuit of happiness” continues in perfect alignment with human
oppression, suppression and extermination. The spirited man and woman is
uniquely distinct from the external man and woman because there history
does not project a dependence on the exploitation of another for their
happiness Instead, their joy is spiritually derived from a relationship with
God that prohibits misery and pain towards others, and in fact, such
behaviors actually blocks ones entry into a peaceful afterlife.
In an environment where inner happiness is secondary to external pursuit,
those humans who enjoy spirited joy, may find their lifestyles under attack
and discredited by those unable to find happiness from within. In such
circumstances, those with spirited happiness, may feel it necessary to
disconnect from their inner selves in order to fit into the disconnected
existence they reside. This begs the question, can a person or people enjoy
happiness if alienated from the very inner spirit that defines them.
Oftentimes, Black people invest time and energy in trying to understand the
behaviors of those with a very different understanding of happiness. In
doing so, through emulation and assimilation they may ultimately block
their own happiness, and become detached from their inner self that is the
driving force of happiness.

The system of white supremacy that unleased a reign of terror has savagely
persisted for over 400 years and continues to desecrate the freedom of Black
men, women and children. This horrific level of oppression has
understandably led to acceptance, emulation and embrace of the external
man and woman’s external focus on happiness that is contrary to the very
being of the spirited man and woman. This ultimately leads to a shared
external focus on happiness for both groups, but for the spirited man and
woman now alienated from their trues selves, they enter a state of inner
disconnectedness compounded by the system of white supremacy designed
to protect the “pursuit of happiness” for the others.
In emulation of the external person, people of African descent have sought
happiness in primarily two futile ways. First, self- preservation through
embracing the white supremacist system orchestrating their own genocide.
There are numerous historical examples of this loss of internal spirit, and a
recent tragic example is Kentucky Attorney General, Daniel Cameron’s,
questionable efforts to protect the lynching of Breonna Taylor. We often
witness the embarrassing episodes of Black people positioned to undermine
the freedom struggle as was the case in the recent shutdown of the NBA
protest orchestrated by system apologists Barack Obama and Lebron James. A historic opportunity crushed as the world learned “we don’t really care
about us”. The spirit that is one with God is loss to a belief in the power of the
oppressor, and sides are chosen that consolidate the alienated view of the
external man and woman. The spirited person exist because of their
personal, action- directed embrace of God. If that is spirit is sufficiently
buried what remains is a potentially spirited person loss in the external
driven world of those who lack spirit.
The second external way Black people seek happiness is through economic
complacency and consumerism. There are numerous examples of those in
the entertainment industry whose careers were built on the support of their
community, but who choose to turn away, cross over and out, and even
attack their fan base as “racist” should they question why suddenly they are
devalued supporters. We can also become trapped by consumerism seeking
happiness through the purchase of the latest gadget on the internet, or the
most popular athetotic shoe. The competition for an expensive car that
extends beyond one’s budget simply because it give us the appearance of
money as success. This consumerism rooted in externalism is what shapes
our minds to the Jefferson interpretation of happiness as a “pursuit”. The
American dream of financial freedom continues to elude us, but we keep
reaching. This is not to say, that we should devalue prosperity; a joy-filled life
and happiness. It does suggest, however, one must ultimately know what
internally makes them happy to achieve happiness.
What makes one happy is not always easily answered. If the answer lies in
the external as to what you can buy, or whom you can exploit than the inner
spirit that drives one to the path of happiness is lost, misplaced or redirected.
The external man and woman never appears to be happy. They seem trapped
in a constant need to dominate, control, exploit, manipulate, humiliate,
harm, steal and terminate. If in your deeper self you are a spirited person
and you choose this path, not only are you untrue to your inner essence, but
because of your inability to realize the elements of domination, control,
exploitation, manipulation, humiliation, harm, theft and termination that
define the pursuit of happiness for the external man and woman freely
under a system of white supremacy, such anti-human values will ultimately
be realized in the oppression and suppression of your own black community.
We cannot forget the sports figures and entertainers who attacked Colin
Kaepernick for taking a knee and initiating a movement that costs him a
career, but strengthened his spirit. The amazing Ice Cube stands strong for
his community and is ridiculed by those who chose economic complacency
over courage and honor. The rapper and actor Common too must be
recognized for his consistent stance for his community and buiding bridges
for Black men to dialogue. The spirited man and woman is the essesence of our ancestors like Nat
Turner, Denmark Vessey, Harriet Tubman, Malcolm X, Dr. Martin Luther
King, Jr., Fannie Lou Hamer, Gloria Richardson, Ella Baker; our ancestors,
great- grandparents, grandparents and parents, many of whom are unsung
heroes. Currently, those of spirit continue with the Black Lives Matter Global
Movement, Color of Change and other groups that demand systemic change
rather than reform. The unapologetically stances for the community by
Colin, Ice Cube, Common, as well as, those athletes who took a stand against
Lebron for folding to corporate interest, and Stevie Wonder who is ouspoken
in his support for justice for Breonna Taylor and others lynched by police.
We are a people of spirit. The values of the external man and woman are still
foreign to our DNA. History demands and our future depends on Black
people connecting and reconnecting with their true selves in order to rise
above and defeat the artificial, inner and human alienating world created by
the external man and woman. My happiness is living a life that is a unique
expression of my inner joy inherited from God fully blessed, born a spirited
woman. What is yours?
(C) All rights reserved.