Who better for VP for this US melting pot than the mother of all humans; a Black woman 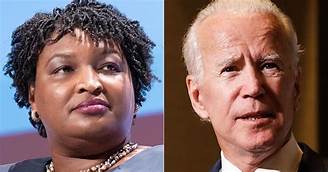 Who better for VP than the Mother of all humans, a Black woman

The choice of Vice President is of critical importance to Joe Biden. While the wrong choice will not make the African American voting block support Trump, they won’t show up for Biden either.

There is no discussion as to the contribution that Black women have made to the building of America. Two of the most important women in American history are Ida B. Wells and Harriet Tubman. Eleanor Roosevelt and Susan B. Anthony are a distant third and forth. They believed in the ideal of an America that was never meant for them. They have contribute so much despite being subjected to the most horrific terrorism, rape and evil deeds few countries have inflicted on its citizens.

There are several qualified African American women that are more than capable of during the job. It makes sense to pick the one that has the most support among African American. That person would be Stacey Abrams. She could tip the scale for Bidden in Georgia and several other swing stats. She should have won the Governor’s race in that state were it not for severe voter suppression. She clearly can motivate people to get out and vote.

A Black woman an speak and connect to all people. Most humans today know that were it not for a Black woman, none of us would be here today.

While Susan Rice and Kamala Harris may have an inside track because they are both married to white men, that won’t excite Black voters. Stacey Abrams has a JD from Yale, she connects with people and she is exciting.  She was a favorite early on with  so called mainstream or White media.

Now that Biden chances are looking better, the media is not bringing up her name. They are pushing Rice or Harris but neither will bring enough Black people out to make that critical difference. Biden will suffer the same fate as Hillary if he does not pick the right running mate. Contrary to what Biden’s Black political supporters say, few African American are excited about his presidential bid.